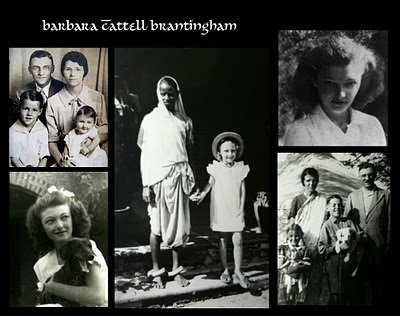 My Mother was raised in India.  She went to school in the Himilayan Mountains. She was exotic and strange to me because I was raised in provinces of China.  We were of different cultures.  I spoke Mandarin and street Taiwanese, she Hindi and English with a slight hint of a British Accent.

Most of my life, in fact perhaps clear up until a few months ago, I didn't understand my mother and we had difficulty between us.  When I came to take care of her back in January, that changed.

My youngest brother Timothy is a wordsmith and the night she died he said it best...he had been flying through the night to reach me and my mother and while enroute was amazed as he looked down through his airplane window at how beautiful the Eastern seaboard is from 10,000 feet above.  He had always thought my Mother's life tragic and sad and that in recent years, things had not gone well for her, but then he saw her from 10,000 feet and saw everything about her differently and with a panoramic perspective.

Most of my life I saw my mother from her alleys, back doors, kitchens, septic systems and wiring panels, from a view so close as to render her landscape nothing but miswirings and faulty pipes.  It was only as she died, that I got that 10,000 foot aerial persepctive and saw for the first time what every single other person around her saw; her majesty, eloquence, wit, beauty and ability to tell the best story about the most mundane thing. It was right under my nose all the time.

Her memorial is tomorrow. My brothers, daughter and sisters- in -law have gathered beside me at my mother's old home in Williamsburg to make arrangments.  We have put right her house, sorted photos, written and cooked a good deal of food.  I have done everything but paint.

I also realized today, that every single record of paintings I have done, I have posted.  I am dry.  This is my last painting until I can start new.  I have so many planned and half done, but not a day at home in my studio in months. 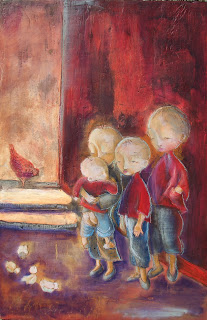 ~the Four Children of Mrs. Bao gathered at the old family home. A new dynasty had begun and everything would be different.
Painted by Jeanne-ming Brantingham 10 comments 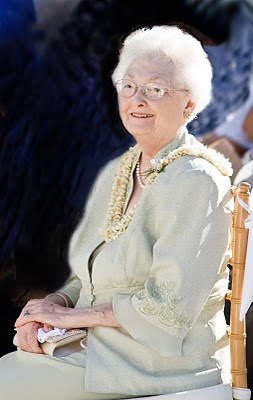 A Stop Along The Way 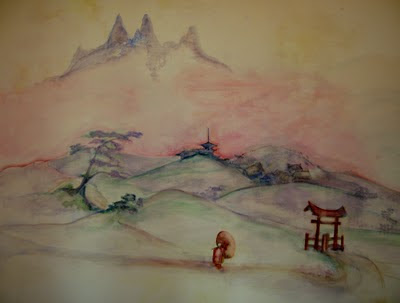 For several weeks now, my Mother has been talking about a trip she started some months ago. She has worried about her suitcase, whether the bus has enough gasoline in the tank and shown a good deal of anxiety as to whether or not she was at the right bus stop. Some days, she surveys a tall mountain and wonders aloud if a proper lorry can be secured to help her make the journey up the mountain to a place she calls Home. As I sit by her bedside, I have listened to these wild adventurous tales and thought she was hallucinating until a kindly Hospice nurse and Mother's wise Doctor informed me yesterday that this is her way of saying she is ready to make her greatest and most wonderful trip ever. To Heaven. So I got her ready.
My mother loves words and metaphors and she has been using them concisely and eloquently these past weeks, even in the midst of unbelievable, unbearable, and unmerciful pain.

And so this is to say, her ticket is bought, she is packed, and yesterday afternoon she let us know she was ready to board the bus for a journey that will take her through the plains of India, the majestic Himalayan peaks, the simple meeting houses of Ohio, over the lush verdant rice paddies of Taiwan, and on to the Purple Mountains of Nanking. Mother always said that the most dangerous and rutted roads lead through the most beautiful scenery. How long this trip will take, I can not be sure. But I guess it won't be long. The rest of this journey is up to my Mother and the Driver.

This is my send off. 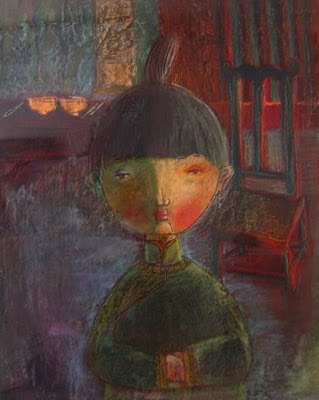 Eldest Sister sent  a message to her brothers and their children, "It is time to come home."

~posting from at my mother's bedside. Shiao Wang took his fish to the Bei Tou Market and rented a small stall next to three ladies from the Chen family who had opened a shop selling knitting supplies and teaching housewives how to knit. They scolded him demanding that he move down a few stalls so that the odor of his trade would not scare off their customers.

~I am posting from Taiwan.  I have spent a restful and much needed relaxing weekend here with my brother and sister-in-law.  Yesterday Tamra and I explored the market in their new neighborhood where I bought knitting yarn for the long airplane ride home and a watermelon.